Fear and Loathing in the Land of Fake Followers 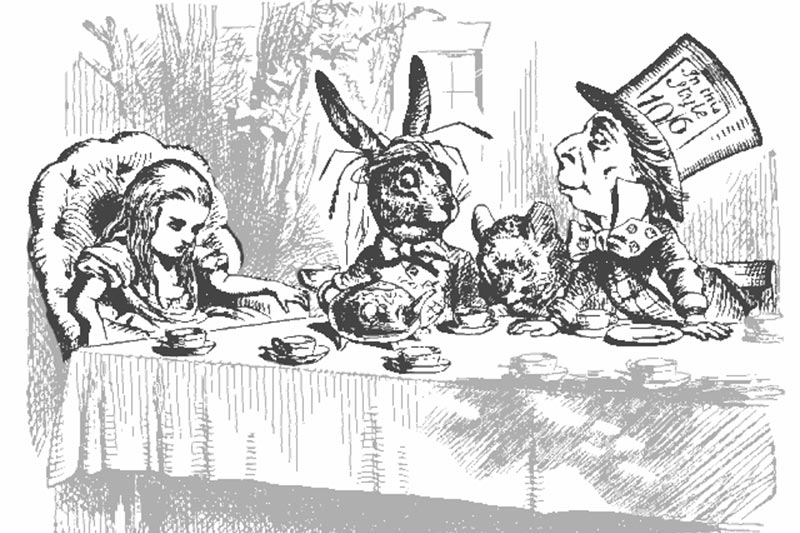 Are You for Real?

Here we are in the wonderful world of make-believe, in the land of Twitter, Facebook, Snapchat, Instagram, Pinterest and Periscope. And what a make-believe world it is, where anyone can rack up 100,000 followers in a weekend if they are willing to pay the price. But what is the real price to pay when buying friends? When your tribe is nothing but a hologram? When no one’s got your back?

“The proper order of things is often a mystery to me. You, too?” —The Cheshire Cat

In my line of work, as part of branding, we set up, design and write posts for our client’s social media accounts. Clients often ask us if we buy followers. I have to say the thought of buying followers doesn’t sit well with me for many reasons all of which fall under the core ethical values that both my design firm and I practice. The same core values I impart to my children on a daily basis.

Let’s look at this word. According to the Holistic Education Network, trustworthiness includes honesty and integrity, to name two. Let’s begin with honesty in communications. When one is truthful in communications, it means “not intentionally misrepresenting a fact (lying).” Okay, so how does that pertain to buying followers on social media? Let’s look at Twitter. Let’s say I visit a person’s Twitter profile, a supposed “expert” in their field. I don’t know about you, but I look at the number of followers they have. I also look at the ratio of followers to following. If their ratio is 3:1, meaning they have three times more followers than the number they are following, I think, well they must know something. I immediately assume that they are doing well in their field, and I follow them. Now, on the other hand, if I visit an individual on Twitter, and they only have let’s say 500 followers, and they are following 400 I might think twice. I might think that they are just getting started on Twitter or don’t really have a lot to offer. I make a judgment call. The problem with this assumption is that many people with thousands of followers are faking it—like people we often encounter in real life, they pretend to be something they aren’t. I could go so far as to say they are con-artists. Now, that may seem harsh but what would you call someone who pretends to be something they aren’t? At least in person I have the opportunity to look them in the eye.

“. . . there’s a social expectation that you are the real you when making these connections,” Alfred Hermida, a UBC journalism professor, and new media researcher told The Star. “In a sense, it’s cheating because at the heart of these networks is the fact they’re social, they’re built on connections.”

Let’s talk about social expectation. Let’s look at LinkedIn for a minute. Let’s talk about endorsements. Don’t get me wrong, I love LinkedIn. I use it to make connections. I use it to find design talent. I use it to showcase my work and my client’s products. But, once LinkedIn launched the Endorsements area, I was disappointed. I mean I’m the first one to appreciate endorsements but when my friends from high school (who I haven’t seen since high school) started endorsing me for skills they had no idea I had, it made me realize that I could no longer depend on LinkedIn endorsements. Now, instead I look for personal recommendations, and I hope those are real. However, I know that many people write their own recommendations and have the person recommending them post the recommendation that they didn’t even write, so I take those with a grain of salt too.

Is this what integrity looks like today? Is this the values we are teaching the next generation? What happened to quality over quantity?

Let’s take a look at sincerity, another part of truthfulness according to the Holistic Education Network. Part of their definition of sincerity states that “saying half-truths or remaining silent with the intention of creating beliefs or leaving impressions that are untrue or misleading” is essentially the antithesis of honesty. I’d say that paying for fake followers falls right into this definition, wouldn’t you? I mean you are leading people to believe that you have a lot of supporters. That you are more important than you are. That people like you. Hell, that a lot of people like you.

What about Jimmy Carter? Do you think he has bought followers? Jimmy Carter doesn’t have a Twitter account, but the Jimmy Carter Library does. I ran an audit using Twitter Audit, and the library received a score of 87%, so they aren’t buying followers. (Every Twitter account has a few fake followers because those hollow accounts have to follow some people, so they troll around and follow a few here and there.)

Both of these men, Charles Bukowski and Jimmy Carter, although they led different lives with most likely different moral compasses, if you asked their friends and colleagues they would both be described as honest men. If I had to guess, I’d say that buying followers would be morally reprehensible to both of them. Wouldn’t you?

A Code of Honor

Let’s take a look at Code of Conduct for a minute. According to the Holistic Education Network, “Honesty in conduct prohibits stealing, cheating, fraud, and trickery.” They state further that “Cheating is not only dishonest but takes advantage of those who are not cheating. It’s a violation of trust and fairness.” Okay, well one might say “Life’s not fair,” and that is true, it isn’t. But no one likes a cheater. What about trickery? Do you like that?

What about responsibility? I was taught responsibility from a young age. That’s the hardest one to impart to our youth, responsibility. Why? Because with responsibility comes self-restraint. Children simply don’t understand the concept of delayed gratification, especially in today’s technical world of everything available now. Hell, self-restraint is a hard one for most adults to grasp, just look at our credit card debt, our overcrowded jails, and our politician’s Snapchats. (Yikes!)

Self-restraint ties into those 7 Deadly Sins, and, when you buy followers I’d say envy, gluttony, greed and sloth are all tapped into. Wouldn’t you? I’m not a religious person per se, but I am human and as a citizen of this world I believe we have a universal responsibility to not “win at any cost.”

What about Fake it ’til you Make it?

We’ve all heard this statement, and I believe in it wholeheartedly, but I think it’s been taken to a new level. The key to remember with fake it ’til you make it is you have to deliver on your promises at one point. Yes, it states fake it but you will never make it if you can’t deliver. I’m sure you’ve heard the statement overpromise and underdeliver – no one wants that, it calls into question your integrity, your skills, your word. Call it the day of reckoning. Call it the moment of truth. Call it what you will. The day is coming when algorithms will be in place to clear those fake Twitter, Facebook and Instagram accounts. Like that day not so long ago when Google shot out their first algorithms to filter out black hat (dishonest) SEO. Those companies, the ones who were trying to “beat the system” were dropped right into the “sandbox” never to be seen again. It will be something like that only worse because you will lose all your “friends” overnight.

A Time for Reflection

I will say the same thing to you that I say to my clients. No company, no brand, no individual wants to get caught with their hand in the cookie jar. If you do the work. If you have a great product. If you deliver on your promises. If you communicate a consistent message. If you deliver value. You don’t need to lie, cheat, trick or blow smoke up someone’s … well, you know what I mean.

I leave you with this quote from a man who never called himself a genius.